You are at: Communication > Business Radio Handhelds > 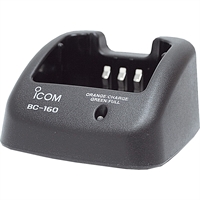 As the capacity of Li-ion battery packs has gradually increased, a single charge cycle with a trickle charger now takes too long for most users.

Therefore the BC-160 has been developed to satisfy the growing exacting needs of commercial organisations. With a rugged construction and competitive price this new charger will be supplied with our latest range of commercial radios, the IC-F34G/F44G series.